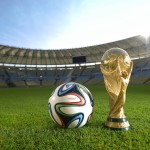 Intrigues of the 2014 FIFA World Cup

For, the second period, second sales phase, 284,597 tickets have in total been allocated to cover the first 24 hours of the 2014 FIFA World Cup. Brazil is still the country boasting the highest number of tickets requested, standing at 207,649. Following closely behind are USA, Colombia, Australia, Argentina, England, Mexico, Chile, France and Canada, with the sales period expected to end on 1st April, 2014.

The stage now has been set for Brazil 2014 FIFA World Cup Final Draw. Spain, Chile, Netherlands and Australia have been pooled together, which has captured the interest of many soccer enthusiasts. Italy, England, Uruguay and Costa Rica comprise yet another intriguing pool. Ghana, Germany, Portugal and USA constitute one group as well, while hosts Brazil will have to contend with Mexico, Croatia and Cameroon. Honduras, France, Switzerland and Ecuador seem to be widely unpredictable as is the case for Group C, made up of Colombia, Japan, Greece and Côte d’Ivoire.

On 12th June 2014, Brazil will host Croatia in Sao Paulo at Arena Corinthians. Meanwhile, Germany will make a record as the first team to play 100 World Cup matches when they play Portugal only five days later. Iconic Maracana, situated in Rio de Janeiro, is the scheduled venue for the Final game, to be played on 13th of July. The participating teams have been grouped as follows: